By clicking you show your interest in this initiative. This will enhance the chances of: 1) obtaining more information from those responsible for the initiative, in case it was shared by others or has limited information; 2) participating in an online discussion forum or assisting a webinar about this particular initiative, similar ones or related topics. Those responsible for the initiatives that raise the highest interest will be contacted to provide more information and/or take part in a discussion forum or webinar (example here full datasheet).

Initially developed to protect poultry from foxes, the use of flashing lights was then extended to various predators: in Nepal to limit depredation of snow leopard over livestock, in Africa against cheetah attacks or in France against wolves.

The device emits flashes of light randomly with an automatic change of colors (9 white and blue LEDs) and is triggered at dusk thanks to an integrated light detector. The light is projected at 360° and can be seen up to 1 km away. One or more devices are placed around the herds where there is a risk of attack.

To install on a stake, a tree or a wire:
- on fenced surfaces, in exposed and visible places
- in combination with other devices
- in prevention, rather than following an attack
- periodically

Disadvantages associated with the device:
- To use temporarily and regularly change location
- Less suitable for large areas and when the topography is marked
- Suspected of disturbing wildlife 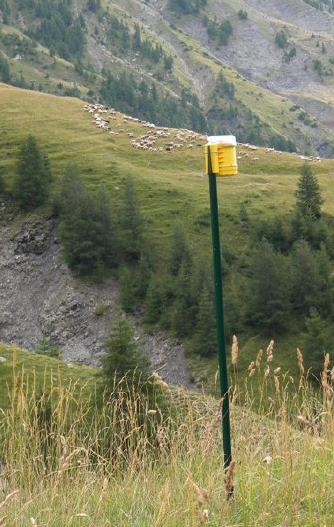