By clicking you show your interest in this initiative. This will enhance the chances of: 1) obtaining more information from those responsible for the initiative, in case it was shared by others or has limited information; 2) participating in an online discussion forum or assisting a webinar about this particular initiative, similar ones or related topics. Those responsible for the initiatives that raise the highest interest will be contacted to provide more information and/or take part in a discussion forum or webinar (example here full datasheet).

Add this initiative to my favorites

Remove this initiative to my favorites

The bee fence is a simple barrier along which are arranged at regular intervals (10 m), hives suspended on a cable. Its operation is based on the observation that elephants would not approach within four meters of a hive (King et al., 2009). Despite the thickness of their skin, they are prone to bites on the proboscis or near the eyes.

Many studies have proven the effectiveness of this deterrent method. Indeed, for example, King et al. (2011) argue that hive fences can be a useful tool to deter elephants from entering agricultural land. Analysis of 32 intrusions has shown that elephants have only once crossed the hive fences to access the indoor crops and that the thorn acacia barriers offer no defense against such invasions.

The positive results of this study strongly support the installation of hive fences in the current elephant deterrent toolbox to be tested on a larger scale. Not only can these fences deter pachyderms, but bees provide farmers with honey and other products for sale, which helps diversify incomes.

When combined with other deterrents, the combination of initiatives could create an effective barrier against elephants. 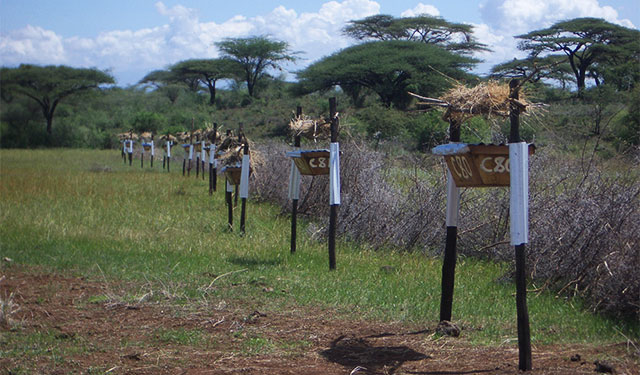