In Namibia's arid north west (semi-arid desert), conflicts are centered around water. Elephant Human Relations Aid (EHRA) is a Namibian NGO that has worked to protect desert-adapted elephants since 2001.
Living under extreme environmental conditions in Namibia’s arid Kunene Region, the desert-dwelling elephants have adapted to survive in rugged yet beautiful landscapes with sparse vegetation and a mean annual rainfall of 150mm. Their sheer presence in such contrasting landscapes generates millions of dollars in revenue from tourism each year for the country, and creates necessary jobs and financial benefits for rural communities. Although not a subspecies (Ishida et al. 2016), the desert-dwelling elephants demonstrate the ultimate adaptive capacity of the African elephant and as an umbrella species their presence in the desert ensures the survival of other mammals, birds, endemic plants and insects (Viljoen, 1987) that rely on the elephants’ feeding habits, water-digging abilities and seed dispersal (Viljoen, 1992). Elephants are believed to have lived in Namibia’s desert regions since long before the arrival of western men. Through records from early hunting expeditions in 1801-1900 into the Kunene Region and the extreme desert north west, the original population size was estimated to be of 2500-3500 elephants (Viljoen, 1987). Through excessive hunting the population dropped to an estimated 1000 individuals in 1935 (Shortridge, 1934). Heavy poaching during the war for independence (1966-1989) reduced the population to 400 animals in 1983 and the subpopulations inhabiting the far north west (Kunene Mouth and Marienfluss) have since gone extinct (Viljoen, 1987). After independence some elephants have returned into the southern most areas of the Kunene Region, into the Ugab River (2001) and the Okongwe area. This area has not yet been recognized by the IUCN as African elephant range.

Since 2003, EHRA has been monitoring the elephants in the Ugab River and Huab River (north of the Ugab), which today comprises 55 individuals. These elephants live outside of national parks and roam over communal land and conservancies.

About 7000+ people live in these dry areas. The government provides villages with boreholes and water points, an installation that usually includes 1-2 water tanks (1000l), connection pipes and a pump. There is either a diesel pump or a windmill, in some rare cases still hand pumps and more and more solar pumps.

Elephants visit these villages and pull pipes, tusk tanks, or push tanks or windmills over, to access water. This causes extreme financial losses and can leave people and their livestock without water for several days.

When EHRA started elephants were shot dead or wounded on an unsustainable basis. To protect elephants, people's property had to be protected.

The sturdy stone walls make sense in an area that is very rocky. Rocks don't cost money and with enough manpower, cement and a car, the wall can be finished after approx. 7 days.

This initiative greatly reduced the number of elephants that were shot, increased tolerance towards elephants and made a more peaceful coexistence possible.

Elephants break water tanks, and pipes, and sometimes houses to access water. The main aim is to protect the water storage facilities in rural villages , as the loss of water in a semi-arid desert puts many human lives at risk.

This is important, so the elephants can still drink water when they are around and don't get frustrated by the now inaccessible water storage facilities.

In some cases this dam is very close to the village and elephants pass by closely. This can be dangerous if people walk at night and without a torch. We started the PEACE Education Project to equip people with the knowledge and skills they need to navigate safely around elephants. However, we help to fund alternative elephant dams further away, if necessary.

Once the water storage facilities are protected, elephants are prevented from breaking the essential equipment. Conflicts and related frustration gets reduced immediately. The way can be regarded as a first-aid help to the problem.

To reach the overall goal of a harmonious coexistence, a holistic approach is needed. EHRA's education project plays a vital role in helping people understand elephant behavior and to stay safe.
Reducing the financial implications of having to provide water for the elephant drinking dam, key drinking sites need to be identified and diesel water pumps be replaced with solar-powered water pumps. We found that this greatly enhances the human-elephant relationship.

- Hight of wall must be 2-3m.
- Make sure that there is at least 3-4m between the water storage facilities and the wall to ensure that the elephants can`t reach over it with their trunk.
- Wall must be smooth outside, so elephants can't step on rocks and push themselves over.
- It must be thick / sturdy enough. At least 1-1.5m wide.
- Foundation must be strong and at least 50cm deep. Use very big rocks for the foundation.

Wall application
Step 1: Villagers apply for a protection wall for a water point used by more than 20 people in their community (EHRA gives out application forms to the conservancy offices)
Step 2: Urgency is assessed. If elephants are around and broke the facilities, the protection of that water point is of priority.
Step 3: Volunteer groups are sent with EHRA staff to the build site.

1) Mark the ground around the water point where the wall is to be built. Make sure that there is at least 3-4m between the water installation and the wall to ensure that the elephants can`t reach over it.
2) Dig the foundation: Dig at least 50cm deep and 1m wide using pickaxe and spade. Lay very big rocks inside and cover with cement until you have a smooth surface. Let it dry!
3) Mix cement: Mix a ratio of 1 spade of cement and 4 spades of small grain sand with water to a thick paste. Make sure it‘s not too liquid as it wouldn't stick to the rocks.
4) Lay the biggest rocks at the bottom to ensure stability of the wall. You can use smaller rocks as you build up. Build at least 2m high and leave a small space for you to walk through.

After the wall is finished, no further maintenance is required.
The elephant dams are usually provided by the government in Namibia. If this is not the case, EHRA assists with building an elephant drinking dam outside the village and connects the pipes to the main bore hole.

MAINTENANCE: It is essential that the villagers understand that the dam must be full at all times. In some cases people don't want to provide water to the elephants because they want to discourage them from coming to the village. Or the pumping is expensive (diesel pumps) and they can't afford it.

Not pumping water for the elephants can be very dangerous as elephants still come and if they can't dink they will get frustrated and might smell water in people's huts. At times they break the huts to access the water. This needs to be communicated clearly. 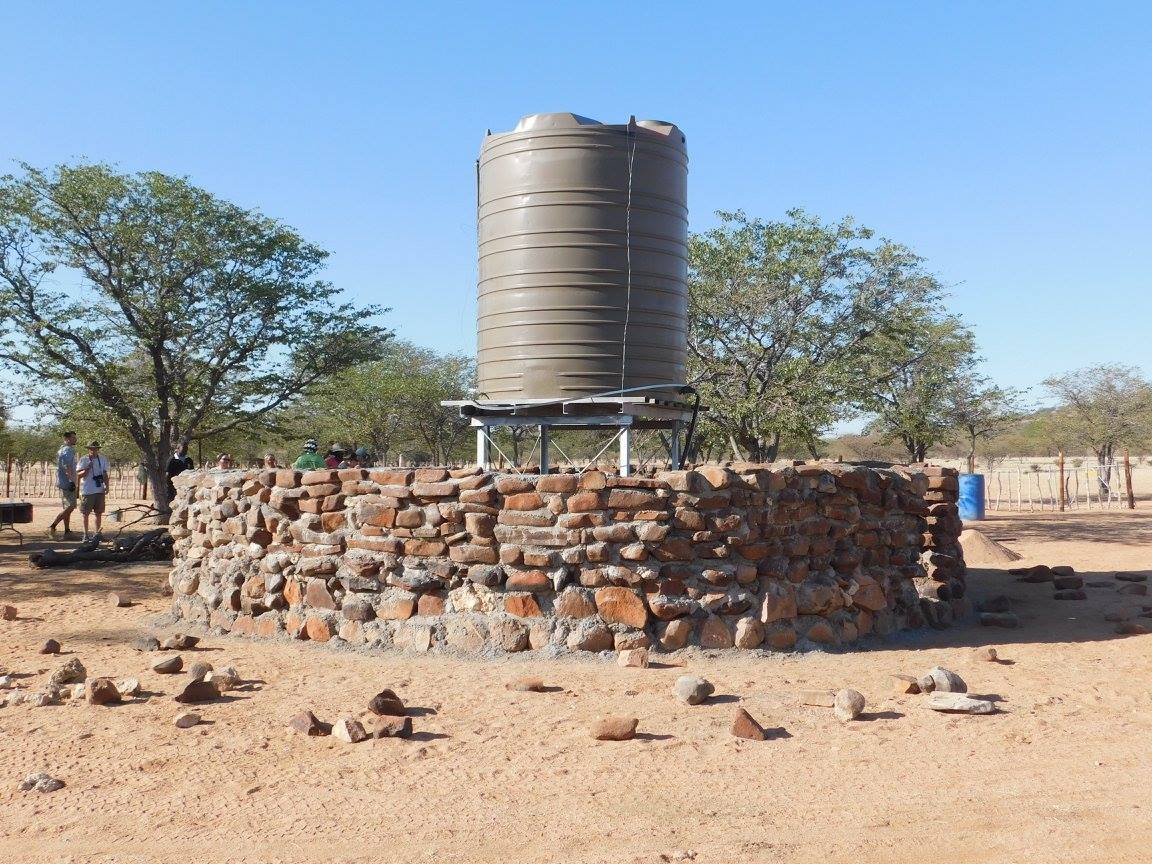 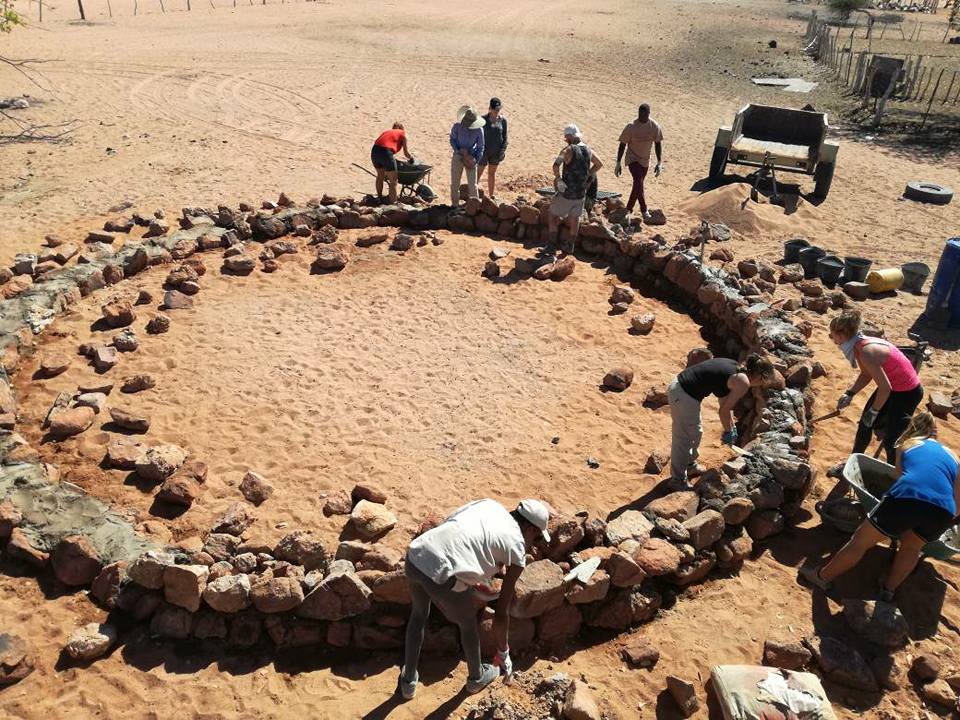